The best and most beautiful things in the world cannot be seen or even touched, they must be felt with the heart. One of the such beautiful lake is Pichola Lake situated in the heart of the city Udaipur. It is an artificial fresh water lake, an oldest and one of the largest lakes of Udaipur. Lake Pichola means “the backyard”.

The beauty of the lake, surrounded by the Aravali hills, the picturesque images of the monuments on the water and the lush green surroundings make this place worth visiting. Rainwater is the main source to fill this lake and when there is more water in the lake, it attracts a lot of Indian and Foreign tourists. A trip on Lake Pichola, though, is incomplete without a boat ride. Famous for its solar-powered motor boats, it boasts of an ecofriendly environment. 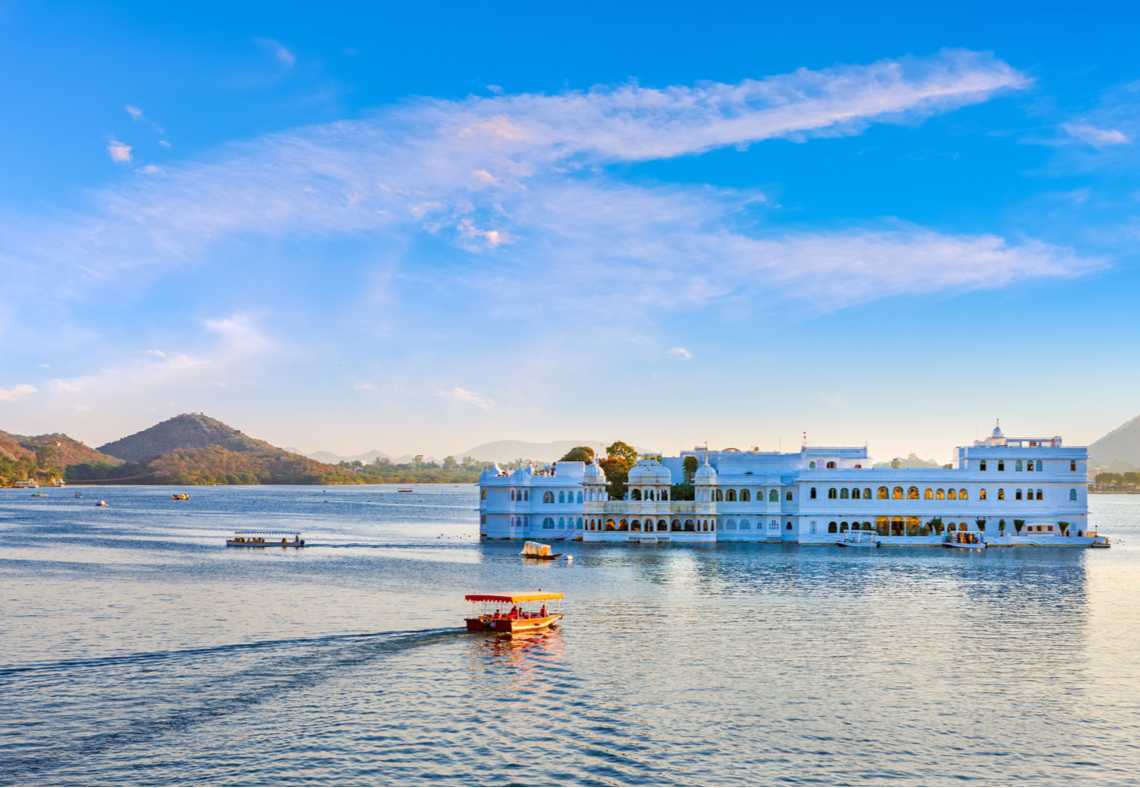 If you wish to see the beauty of the calm blue waters, then stay here till the sun sets. You can here have a feast with myriad restaurants offering a number of local delicacies. Picholi Bar, one of the most famous restaurants here, promises a lovely evening complete with stunning views and delicious food. Rudyard Kipling mentioned this lake in his Letters of Marque (1899), “If the Venetian owned the Pichola Lake, he might say with justice, `see it and die'”.

Pichola lake is nearly 4 km length, 3km width and gets maximum deep at the time of heavy rains, but dry up at the time of severe drought. Named after the nearby Picholi Village, two islands locally known as Jag Niwas and Jag Mandir are located within Pichola Lake. On its shores are the Oberoi Udaivilas, the Leela Palace Kempinski, two heritage hotels – Shiv Niwas and Fateh Prakash – and the City Palace museum. Jag Niwas Island is entirely covered by the Lake Palace, a 250 year old white marble and mosaic summer palace.

One of the most romantic places in the world, it is a beautiful palace, situated in the mid of the Lake Pichola. The palace is now a five star heritage hotel under Taj Group of hotels, with beautiful gardens and pavilions. Appears to be emerging from clean blue water, it is the most photographed hotel in India. The palace was built by Maharaja Jagat Singh as his summer home in 1740. 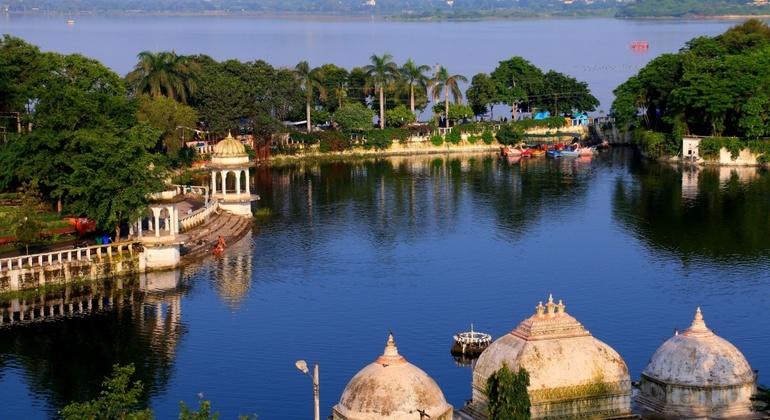 Its courtyard has a restaurant offering stunning scenic views. Sheesh Mahal (The Mirror Palace), Krishna Vilas (The Abode of Lord Krishna), Chini Chitrashala (Chinese Art Gallery), Mor Chowk (Peacock Court) and the Amar Vilas (The Eernal Abode) are the main attractions of this palace. Jag Mandir is a three storied building, built of yellow sandstone dedicated to the Lord of the Universe. Its inner lining is made of marble. The interior is decorated with coloured stones and presently it boasts some exquisite Mughal paintings. The courtyard center has exquisitely carved chhatri of special grey-green granite.

The island is well maintained, with fountains and has a row of elephants that look like guarding the island. It is also said that Jagmandir was the inspiration behind the Shah Jahan’s Taj Mahal. He took many ideas especially the pieta dura work from Jag Mandir palace. Now this Island has hosted a number of grand events through the decades including weddings and Royal parties.

Besides Jag mandir and Jag Niwas there is the Mohan Mandir and Natani ka Chabutra. The Mohan Mandir was built between 1628 and 1652 by Jagat Singh. Even though it looks like a temple, it does not have a deity. It was built in memory of one of the unofficial sons of Maharana Jagat Singh, Mohandas. Presently it is owned by the state government and is used for display of fireworks during the Gangeur or Mewar festival.

Natini Chabutra, a raised platform in the courtyard built in the memory of a natani (tightrope walker). There is a story behind it. Maharana Jawan Singh offered half of the Mewar Kingdome to a tightrope walker if she crossed the lake from a village on the west bank to the City Palace on the East bank. But she was cheated as the rope got cut off and she drowned in the lake. Before she drowned, she cursed the Maharana family that there would not be any direct successors for them. That curse believed come true. 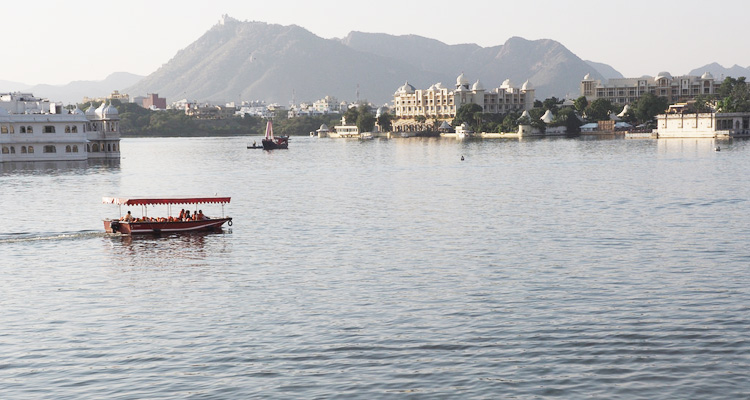 Most beautiful at sunrise and sunset, one can sit and enjoy this beautiful lake on Lal Ghat, Gangaur Ghat and Hanuman Ghat . It also offers excellent opportunity for boat riding.,the tourists are usually ferried in boats to their destined hotels.

Three of the numerous lakes found in the vicinity of Udaipur which connect with the Pichola lake and the Saroop Sagar Lake which in turn connects to the Fateh Sagar Lake, the crystal watered lake in the midst of tree lined hills and the smaller Arsi vilas.

Legends say that it was created early in the 15th century, during the reign of Maharana Lakha by a Banjara tribesman, Pichhu Banjara who built a bridge over it as his Bullocks couldn’t cross the stream of the Lake. 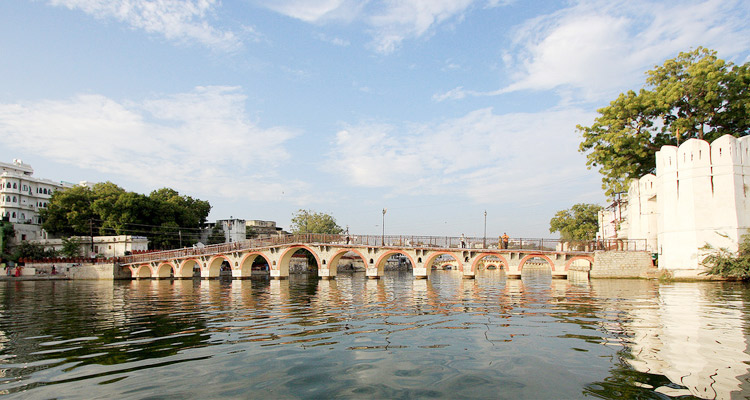 The boat ride to Jag Mandir Palace gives you great photo opportunities. Capture amazing views of the City Palace Complex across Lake Pichola. Take the sunset boat ride and watch the sunset over Lake Pichola for a divine experience. It’s a good place to spend an evening as it is located at the heart of the city.