This Ghat is also known as HANUMAN GHAT is  located near pichola lake. This Ghat which was before referred as Manjhi Ghat has now surely occupied a permanent location in the hearts of especially the young blood. Ambrai Ghat is a gateway to a delighting experience that passes from the old streets of the area called as Old City in Udaipur.

In the charm of Udaipur a vital role is played by the astounding Lakes that are stretched on the ground of our Mewar and serve generating scenic beauty that shall be mesmerized by each. The Udaipurites bestow their affection on the spots that deliver eternal nirvana, hence as everybody is aware of the fact that Ambrai is one of the most loved places of Udaipurites. 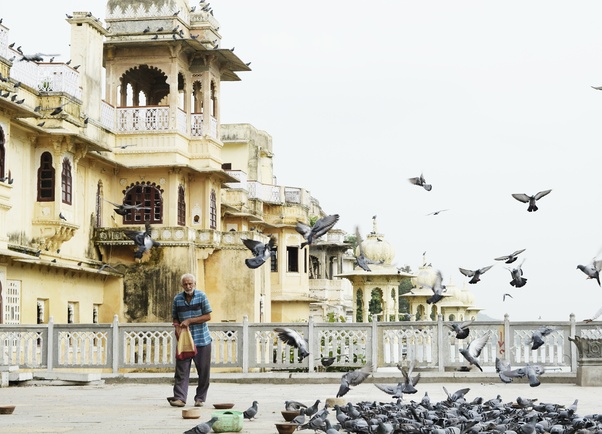 The Ambrai Ghat has been maintained well by the Nagar Parishad of Udaipur, marble boundaries are installed and wide seats for resting are available on the Ghat.As the sun rises from the waters of Pichola Lake, the ghat is filled with locals who are swimming enthusiasts.

They dive in the Pichola Lake from the Ghat and embrace the clean water of the Lake. At the day time mostly the place remains less crowded but as the sun goes down, the place gets crowded with youngsters. It is also one of the places where couples love to hangout, also a beautiful place for having various photo shoots including pre-wedding photo shoots.

Set at lake-shore level, looking across the water to the floodlit City Palace in one direction and Jagniwas in the other, this is one highly romantic restaurant at night with candlelit, white-linen tables beneath enormous trees. And the service and cuisine do justice to its fabulous position, with terrific tandoor and curries and a bar to complement the dining.