The Sasbahu Temples or Sahasra Bahu temples, at Nagda, Rajasthan, are a pair of late 10th-century Hindu temples dedicated to Vishnu They share a platform, facing the temple tank, and are similar in style, but one is rather larger than the other. The larger one is surrounded by ten subsidiary shrines, the smaller by four; only the bases remain of some of these. The temples have many of the characteristics of slightly later Māru-Gurjara architecture but lack others, especially in the plan and exterior sculpture.

They are locally referred to as Sas Bahu temples (a local corruption of the original Sahasra-Bahu, meaning “One with thousand arms”, a form of Vishnu).

Nagda was once an important city of Mewar, possibly the capital of one of its rulers.

Both temples have a sanctuary, mandapa with side projections, and an open porch. Their somewhat ruined shikharas are in brick, with many subsidiary turrets. That of the smaller temple has been largely repaired, while the larger one remains truncated. Below the platform, there is a Torana-style entrance screen, with four columns and a decorative cusped arch in the centre.

Going by the historical records, these are no temples dedicated to glorifying the saas (mother-in-law) and bahu (daughter-in-law). Rather, a certain king Mahipala of Kachchhwaha Dynasty got them constructed sometime in the 10th or 11th century A.D. It is a commonly held belief that the queen of Mahipala was a devotee of Lord Vishnu.

The king was kind enough to get a temple made for his beloved spouse, wherein she could worship her favored deity. Later, the prince got himself a wife, who was a worshipper of Lord Shiva. Therefore, another temple of Lord Shiva was built right next to the Vishnu shrine for the daughter-in-law.

From ‘Sahastrabahu’ to ‘Sas Bahu’ 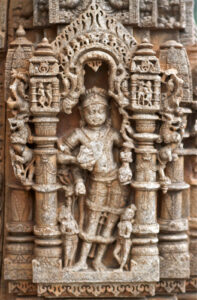 As time passed, the name got corrupted, and the temple became popular as Saas-Bahu Temple due to the reason of its origin. Apparently, the Saas temple is comparatively larger than the other shrine.

Is this your business?

Claim listing is the best way to manage and protect your business.