Rajasthan is famous for its rich and prolific art treasures. Some of its architectural monuments are considered among the best in the world. The Ranakpur Jain Temple excels at them all as an exquisite work of art and architecture. There are a number of beautiful and delicately carved sculptures in this shrine that defy comparison. The temple is an eloquent testimony to India’s cultural heritage, her unique architecture, and the vision and acumen of her past master artists.

The construction is well documented in a 1436 CE copper-plate record, inscriptions in the temple, and a Sanskrit text Soma-Saubhagya Kavya. Inspired by a dream of a celestial vehicle, Dharna Shah a Porwal from Ghanerao, commenced its construction in 1389, under the patronage of Rana Kumbha, then ruler of Mewar.

The architect who oversaw the project was named Deepa. There is an inscription on a pillar near the main shrine stating that in 1439 Deepaka, an architect, constructed the temple in the direction of Dharanka, a devoted Jain. When the ground floor was completed, Acharya Soma Sundar Suri of Tapa Gaccha supervised the ceremonies, which are described in Soma-Saubhagya Kavya. The construction continued until 1458 CE. However, according to the audio guide provided to visitors to the site, construction lasted fifty years (and involved 2785 workers).

Another source reports that construction continued until 1496, fifty years from 1446. The town of Ranakpur and the temple are named after the provincial ruler monarch, Rana Kumbha who supported the construction of the temple. Ranakpur along with Muchhal Mahavir, Narlai, Nadol, and Varkana forms Gorwad Panch Tirth.

Whilst Dilwara temples are known for their sculptural work, this temple is famous for its intricate carvings and unique architecture. It was built in the form of Nalini-Gulma Vimana(a heavenly vehicle Dharna Shah saw in his dreams). This temple is built in Māru-Gurjara architecture. 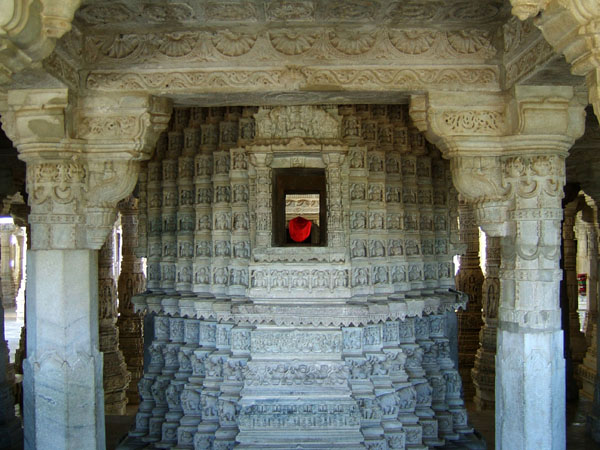 This courtyard is surrounded by a wall enclosing sub-shrines.l is also exclusive on projections like devakulikas and minor deity. The temple has five shikharas amongst which the central one is the largest. The temple is rich with sculptural pieces – carvings created with great skill and artistry.

The Shikhara in the temple is symbolic of Mount Meru, the mountain which forms the axis of Jambudvipa with a preaching hall as the Samavasarana.

Chaturmukha temple is a 15th-century temple dedicated to Adinatha built using white marble in the midst of a forest. The temple name is credited to its design of chaumukha— with four faces. The construction of the temple and quadrupled image symbolize the Tirthankara’s conquest of the four cardinal directions and hence the cosmos.

The temple is one of the largest Jain temples and considered one of the five holiest Jain shrines in India and part of Gorwad Panch Tirth. The architecture and stone carvings of the temple are based on the Ancient Mirpur Jain Temple at Mirpur in Rajasthan.

The temple is a grand white marble structure spread over 48,000 square feet (4,500 m2) with 1444 marble pillars, twenty-nine halls, eighty domes, and 426 columns. One pillar is incomplete and legend says every time it is built the next morning the pillar breaks down again.

The temple, with its distinctive domes, shikhara, turrets, and cupolas rises majestically from the slope of a hill. 1444 marble pillars, carved in exquisite detail, support the temple. The pillars individually carved and no two pillars are the same.

Legend says that it is impossible to count the pillars. In the axis of the main entrance, on the western side, is the largest image. Inside the garbhagriha, the moolnayak of this temple, there is a 6-ft. tall, white-coloured chaumukha idol of Adinath with four heads facing in four directions. Temple has a total of 84 bhonyra (underground chambers) built to protect the Jain idols from the Mughals.

The temple is famous for its beautiful carved idol of Parshvanatha made out of a single marble slab. The idol has 1008 snakeheads and numerous tails. Two chauri bearers and Yaksha and yakshi, half-human and half-snake, stand on either side. There are two elephants purifying Parshvanatha. One cannot find the end of the tails. The temple also has a representation of Ashtapad, showing eight Tirthankaras in a row, Girnar and Nandishwar Dvipa. The design of the temple inspired Pittalhar temple, Dilwara in 1459 AD and in the Palitana temple complex in 1681.